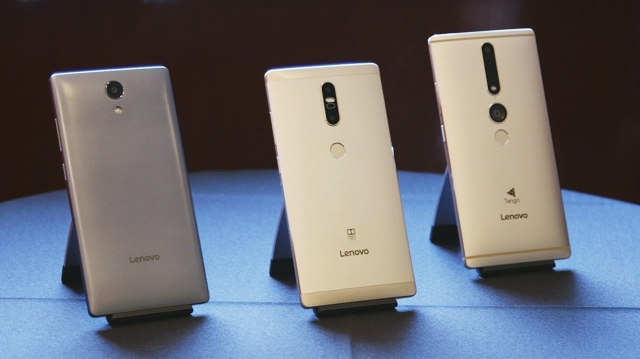 Lenovo Phab 2 Pro is equipped with 6.4-inch display which comes with IPS LCD screen. It has a 2k or Ultra-High Definition display which gives a clear and sharp picture. It has a screen resolution of 1440 x 2560 pixels and screen to body ratio is 70.8 %. This device has a pixel density of 459 PPI which is good. It has a great display and sunlight legibility is just superb.

Lenovo Phab 2 is also equipped with same 6.4-inch display and IPS LCD screen. But, the display is the only High Definition (HD), not even Full High Definition (FHD). It has a screen resolution of 720 x 1280 pixels and screen to body ratio of 71.93%. It has a pixel density of 229 PPI which is very less for 6.4-inch screen.

Both the devices lack a physical home key button and have three capacitive keys with back key on the left side. There is no branding on the front side for both the phones. In Lenovo Phab 2 Pro, 8 MP front camera lies above the display whereas Lenovo Phab 2 has 5 MP camera on the front side. In both the devices, power key and volume keys lie on the right side. The hybrid SIM tray lies on the left side of the phone. Again, for both the devices 3.5 mm headphone jack is located at the top of the device and back cover is not- user replaceable.

Both the devices run on the same operating system i.e. Android Marshmallow (6.0) with its own VIBE UI on top.

Lenovo Phab 2 Pro is one of the few devices using Google 3D Tango Augmented Reality technology in its camera.  This is one of the most important features which set it apart from Lenovo Phab 2 and other devices as well.  The Google 3D technology adds a wide-angle camera and depth-sensing unit to the 16MP rear camera. Additionally, it has all the usual shooting modes like Continuous Shooting, High Dynamic Range mode (HDR), and Touch to Focus. This device lacks Optical Image Stabilization and LED FLASH.

For selfies, Lenovo Phab 2 Pro has an 8 MP front camera with no flash.

Lenovo Phab 2, on the other hand, is equipped with 13 MP rear camera with CMOS image sensor and phase detection autofocus. It also has the usual shooting modes. The images have the resolution of 4128 x 3096 Pixels.

For selfies, Lenovo Phab 2 has a 5 MP front camera with no flash.

Both the devices have a similar battery capacity of the 4050mAh battery.  They both have a non-removable battery but only Phab 2 Pro supports fast charging.